I don’t know about you, but I’ve been kind of busy the last week or so.  I got hired to play music at a wedding, completely by accident!  I also have been making real-life friends, which is hilarious.  And working out, which makes me look so much more attractive than normal (seriously, sweat does something for me.  No, it does.  Totally.)

Anyway, I’m in a bit of a pickle here.  My Gay Girl superpowers only go so far, and I only have so many super-creative ideas for posts knocking around my brainbox!

I need your help, trusty readership!  What sort of things do you want to see happen here?  More lists?  I need moar topics!  More survival guide entries?  Anything that you’ve had a particular issue with recently?

I know you were all waiting for this.  This is probably the nerdiest thing I’ve ever written, except for that time I wrote some fan fiction for Gundam Wing.

And even if you weren’t, that’s okay.  Whoever follows me on tumblr (ahem ahem shameless plug) will have noticed a pick-up in the superheroine-type things I’ve been reblogging.  It happens.  It started with me wanting to learn  everything about Wonder Woman and went on from there, so without too much ado, I present in no particular order, some really amazing super- and meta-human ladies! 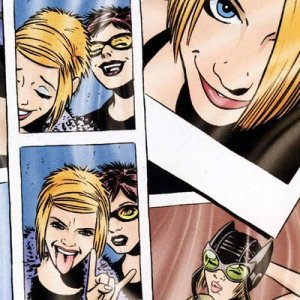 I can’t be the only one who sees it

Did you guys know Catwoman had a sort-of sidekick?  Who was gay?  Because I didn’t until I started looking into these things.  Holly manages to stab Batman in the leg and then end up at a convent.  At some point she comes back, takes over being Catwoman while Selina is on maternity leave, dies, but not really, and she’s Selina Kyle‘s BFF/roommate/probably girlfriend sometimes.  At least, that’s what happened In My Head. 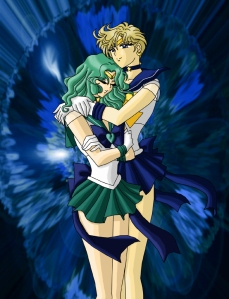 Image by AmayaKouryuu at deviantart

I have to include these ladies as a pair, because they’re a couple.  I don’t really care what the English dub of “Sailor Moon” that you watched on Toonami said, they’re not cousins.  Cousins don’t have pot points like Sailor Uranus (Haruka) kissing Sailor Moon, or dressing up as Tuxedo Mask, or, y’know, sexin’ up Sailor Neptune (Michiru).  I really love the two of them, because Haruka is super flirty and Michiru is quieter and super-polite.  They balance each other out so well and I can’t help it, they’re so effin’ cute.  Seriously, I’m still not sure how I was so naive to think lady cousins should be so friendly.  I know better now, and so do you. 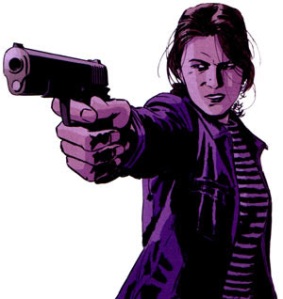 Look at that striped shirt and blazer. Hot!

So Renee Montoya was a cop, which is pretty sexy and superhumanly in and of itself.  HOWEVER, she’s also The Question!  AND Batwoman‘s girlfriend, for a hot minute!  Can I sum it up decently by saying she’s a fabulous representation of a person of color (her parents are immigrants from the Dominican Republic)?  No.  I can’t really sum her up neatly, she’s more complex than that.  This lady has some srs bznss in her background and I would need more coffee and at least three blog posts to cover it.  She dated Batwoman, has alcohol issues, and kicks the crap out of people.  And she wears a tie while doing a lot of these things.  Unf.

I think I’m in love

Holy CRAP, this woman.  Those biceps.  Wikipedia says “Her hidden identity was that of a super strong stripper who worked at a club called the BoomBoom Room”.  Does this explain what I’m about to say?  Maybe.  Knockout is really more of a villain than superheroine, but this is my list so hush.  She’s been on the Suicide Squad and the Secret Six, and has died or almost died a couple of times.  No, really.  It’s canon.  I like Knockout because 1, her name is a great pun and 2, she’s like eight feet tall and 3, she was dating the next lady on this list… 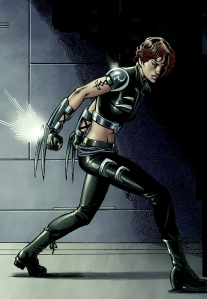 Scandal scares me a little bit.  Maybe it’s that crazy combat mastery, or her really freaky weapons (seriously, “lamentation blades”?), but it’s probably more that she can re-grow her guts.  Her dad’s immortal, so what do you expect?  But I do love a lady who’s tough, and she’s fought freaking Talia al Ghul (a sometimes-Batman girlfriend) and lived through being shot and almost blown up and such.  I think she’s a big softie, judging from her reaction to her girlfriend Knockout’s death, so… I like her.  Is it weird that I find the tough girls attractive?

I couldn’t notput her on this list.  Kate Kane‘s Batwoman is easily the most recognizable of the women I picked, not to mention the most gay.  She gets booted from a military academy for dating another (female) student, and gets it on with attractive lesbian cops a lot.  Mostly I love how complicated she is, she’s not just the token gay title character.  Seriously, I can’t tell you how big a deal that is.  Also she’s a redhead with tattoos, and that’s never a bad thing.  If you’re not interested in the storylines of the most recent Batwoman issues, just go for the art.

Look at this, it’s beautiful, now go get it!

I’m pretty sure I’m missing a good deal of lesbionic butt-kickers, because not every superheroine who doesn’t necessarily need a dude to save her or partner up with is queer, so drop me a line on Twitter, or tumblr, or down in the comments and talk to me about your favorite queer superheroines!

A Gay Girl’s Advice For Guys